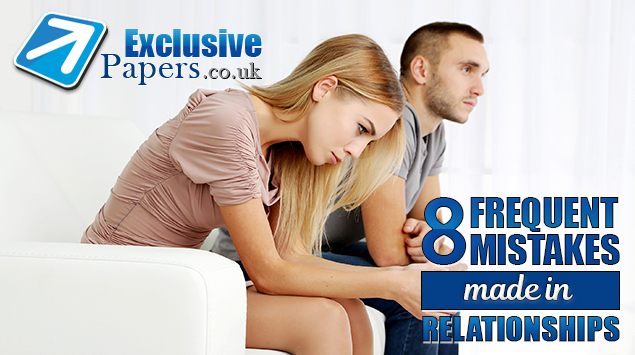 Mistakes Made in Relationships

Relations can be amusing and warmhearted, but mostly in all cases, they are full of different challenges. Some of them such as emotional, verbal, or physical abuse are the automatic grounds for ending relations, but there are things, which are less obvious. If not corrected or ignored, they might be a catalyst for a breakup. You need to prevent those things, which can ruin everything, before it’s too late. Remember, that relationship is always a hard work of two.

Sometimes people behave like nothing happened when they having an issue, and rather than solve the problem they remain silent. Your partner does not always acknowledge what he did wrong, so being speechless in this case might complicate the problem.

Cutting off the discussion

Of course, it’s easier to walk away to prove your point of view in the conversation, but try to end it up, because cutting off the conversation when you’re done is unfair play. Take a minute to collect the ideas when you want to slam the doors and leave. Tying up loose ends can help to save the relationship.

This point is probably the hardest one because emotions are the most complicated things to control. Sometimes it is good to express them freely, but when you start doing foregone conclusions based on your emotional reactions, it’s time to stop.

Matching your partner to an ex

Patterns of previous experience may be a crucial fact in improving our behavior in similar situations in future, but it’s not about matching your current partner to an ex. Fight your brain’s addiction to patterns and don’t forget that each of us is a unique creature with unique experience and plans.

It’s great to have an exceptional memory, but do not use it in order to remember everything negative done in the past, especially after the apologies from your partner. You'll both make plenty of mistakes during lifetime, and you'll both do plenty of wonderful things.

Lots of people are scared to show true love and kindness in their relationship. Yes, it’s pretty acceptable when you have just met, but when you're both in it for the long haul, give all you can. If your beloved is not aboveboard and shows less passion, resist the urge to match their ways.

Threatening to break up

Avoid doing it at all costs! It may be a big mistake even if it is said without actual means. By threatening your partner to break up, you are playing on his feelings, which is a cruel and unfair move, remember it!

Expecting your partner to change

Let’s be honest, people never change forcibly, so it’s senseless to wait until your partner will do so. You can try to accept some particular peculiarities of each other or to find compromises. Learn to see those differences as positive and your relations will improve straight away!